Zeke (DOB January 15, 2017) arrived with his brother Simba, here at the Jungle May 13th 2017. Both were generously donated to the Jungle for our Educational program.

Zeke and Simba are double trouble! Their favorite past time is sinking their boomer balls or lounging in their super sized hammock with their favorite human Robert!

These guys may very well remain together throughout their entire lives. In the wild males can and will do this until they can establish their own pride of lioness’s. It has been also discovered there has been occasion where both brothers rule a pride with one acting as sentry while the other has the breeding rights.

You should not neuter a lion as his mane will fall out. Even in the wild, if a male lion gets significantly injured, they will start to lose their manes (the mane is indicitive of the levels of testosterone). Male lions tend to avoid another male lion with a full mane as this is a testiment that he has done well in battle.

Neutering ANY big cat has now been found to lead to premature arthritis as well (lack of testosterone for muscle) mot to mention the immediate risk of anesthetic death. 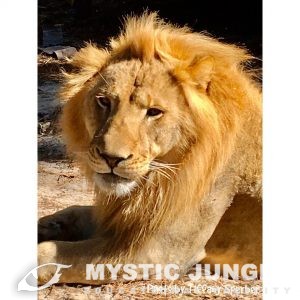