Simba (DOB – January 15th 2017) arrived with his brother Zeke on May 13th 2017 after having been graciously donated to Mystic Jungle as part of our Educational programs.

The numbers of lions are dropping drastically in their native land as human population and poaching runs rampant. The king of the Jungle is losing ground fast. And due to constraints on the importation (Cites of July 1975) the captive population is now suffering a symptom of the genetic bottle necking that is occuring. MANY captive bred lions here in the USA develop ataxia and seizures at or before 18 to 24 months of age. We are very blessed that both Simba and Zeke are the result of careful genetic research as they are both the picture of health.

We are often asked how long we can keep the brothers together. They can remain together as long as we do not introduce another lion (male or female) as this would change the dynamics of their pride. 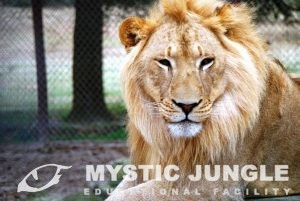