Bannah (DOB – May 3rd 2013) came to us January 10th 2019, after her owner called us asking MJEF to help. She had been seized by the State of Conn by DEEP. Her owner fought for 10 months in court just to be allowed to have say in where she was to be sent. He wanted her to go to Mystic Jungle as we understand that an animal that has been raised in a house with humans, slept with humans and treated as a house pet does not do very well just tossed into a cage and treated like a wild animal (they are of wild lineage but are born under captive breeding programs so they have NEVER seen the wild)

He had tried several places and they all stated that she could come but he would never see her again.

We agreed and the judge ordered she be released to MJEF. She was soon followed by her prior owner to help her adjust to her new way of life (these animals do not have the cognative ability to reason or understand what just happened to their world. They just lost the only home they have ever known, thrown outside and treated like wild animals aka no petting etc) Often what happens is they stress (Cortisol levels raise severely which can and does lead to systemic organ failure)

Her prior owner slept in the enclosure with her to help her adjust! When her prior owner had to leave to go back home due to a medical emergency, she was being housed next to lover boy Shrek. It was love at first sight! Bobcats in the wild do not pair up unless it is time to mate. In fact if the female is not in heat and she crosses a males territory often times a turf war will break out. But here at the Jungle, food is bountiful (so no need to guard the land for the prey) they don’t have to worry about other predators, and they have the best of health care! So we allow Shrek and Bannah to live together and it is a match made in heaven! (Bannah is spayed) 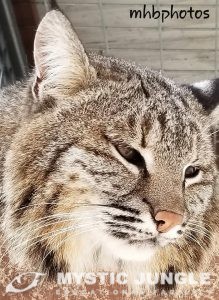