Fiona (DOB – March 28th 2012)  on high alert! Notice the side feathering around her face? This signifies her emotional status. The bobcat can flatten those hairs or flair them to make themselves appear much bigger than they are. Similar to the Cobra!! My favorite saying is “Feathers down, safe and sound, Feathers up, BETTER DUCK!” as when the feathering is flattened, the bobcat is calm… but flared they either unsure of something and going to investigate or on the attack!

Bob cats are harvested for their pelts. They only part utilized is the under belly which is soft and white. Florida is one of the few states that actually have a bob cat hunting season as they have a very stable population here.

Fiona is much more aloof than her brother Shrek, but none the less still near and dear to our hearts. A highly intelligent girl, her favorite thing is to steal shoes. And once she has them.. they are her’s! 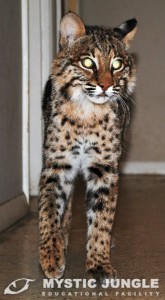