Shrek (DOB March 28th 2012)  ever the ham, will pose anytime he sees the camera! He does a fine job on being a true ambassador for this wild relatives.

Very inquisitive, he seems to love everyone and has a purr that sounds like a motor boat.

Bob cats are often mistaken for a Lynx and in reality the are a Lynx but are called Lynx Rufus.

These highly adaptable cats can co-exist along side of urban developments. They will eat almost anything, including carrion. They are hard wired to survive. 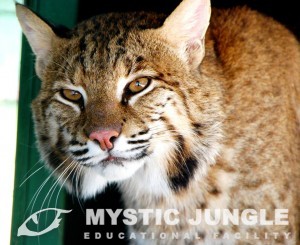 A study also showed that in ALL the Lynx family there comes a time every few years or so, in not only the wild, but in captivity, they have a phenomenon called siblicide. They will at the age of 6-8 weeks of age all of a sudden just like a light switch has been turned on, turn on their sibling(s) and try to kill each other. The mother in the wild, will toss the kittens apart and break up the fights, but sometimes this does end up in fatalities. This makes one wonder if this is natures way of culling out the population if the bobcat population is up too high and the prey is too low.