Spike came to the Jungle at the tender age of 3 months old. (DOB July 15th 2009) He was a photo cub that was utilized to raise public awareness of the tiger in the wild.

Why the jungle wants to delve and share into Spike’s past is the fact that people are told that the photo cubs utilized are sold to canned hunts and while this may RARELY happen with a sadistic owner, the majority of these facilities that practice utilizing the hands on approach to conservation, place these cubs into private facilities such as ours. The constant human interaction has made Spike a very loving, playful tiger that is a camera hound, and always seeking attention from his human caretakers.

Tigers cannot purr but they do have an equivalent known as “chuffing”. When happy they make this chuffing sound in greeting.

The Siberian/Amur Tiger is the biggest of the big cats and can measure almost four feet tall at the withers, with legs the size of tree trunks. They have a ruff of white around the face, and their face is a bit more bull dog in appearance compared to their Bengal relatives. They also are more tawny in color with  thinner stripes. They can weigh upwards of 700 pounds. Today there are less then 500 left in the wild

Did you know that the captive big cats of today are the result of over 15 generations of captive breeding programs. The importation/exportation of rare and endangered species was prohibitive with the induction of CITES in July of 1975. So when you hear statements such as “there are more tigers in captivity than there are in the wild” this is not a true tragedy, but may be the saving grace of the species. Poaching is where the cat is worth more dead than alive and the cat is parted out. So again, when you hear “poached” in the case of the big cats, it is not where someone is taking a big cat from the wild to exhibit.. it is when they have killed this magnificent animal for it’s body parts. 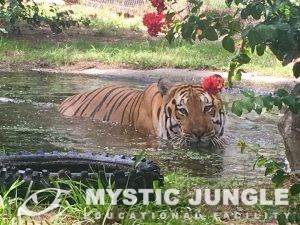