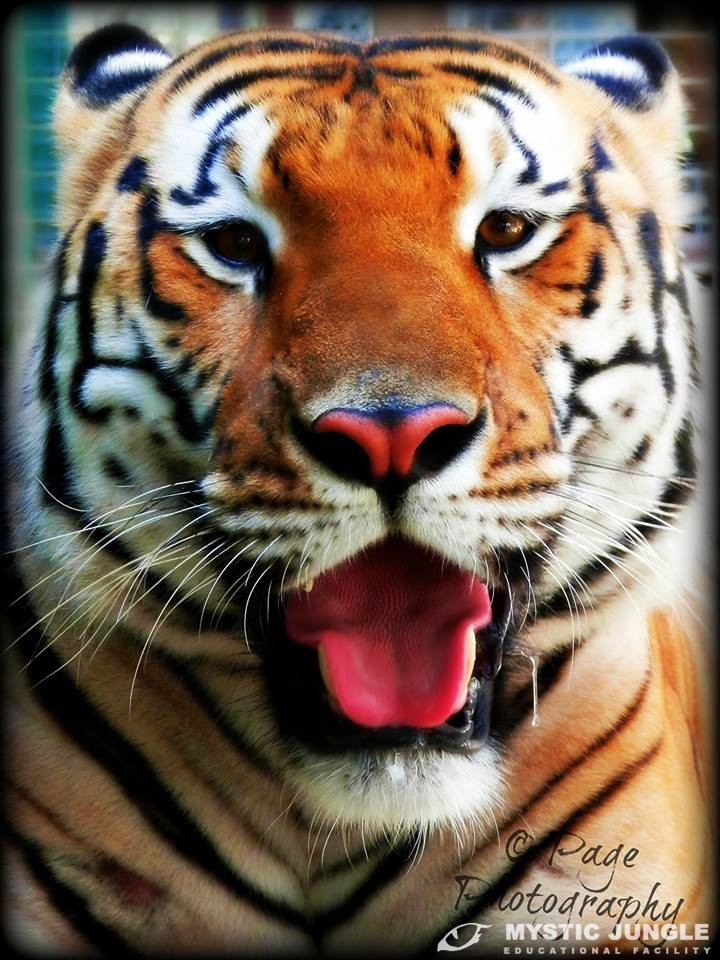 November brought in the normal fall weather. Plans were in the making for the expansion of exhibits, building Spikes new enclosure and so much more. Little did we know what life had planned for us in the upcoming weeks.

The holidays came and went, and with them came the arrival of our newest member. Solomon. An engaging, energetic, and sometimes down right rotten, Bengal Tiger cub. Plans were made for one more enclosure and life was looking great. Everyone healthy and happy. That was until the final tour of the season.

On this last tour, I did notice at the time that Spike was not as engaging with the audience. His usual behavior is one of a show off, often jumping in and out of his pool, and playing with his bubbles! Yet this day, he just sat and observed everyone. I fluffed it off to this was a larger crowd than normal, one that we had to bring in extra help to guide our friends along the paths. This was on December 22.

Christmas came and went. And Spike was doing ok, other than he was doing things that now as I reflect, I am almost ashamed of myself for not picking up on them. He was not playing in his pool anymore. He was not dragging around his tire, he was not sunning himself in his normal spot. Things that when you are in such close contact with these amazing animals, you know their every day habits. His eating habits were as always, most of the time he would eat all of his meal, but some days, he would leave a few pieces. Nothing really to panic about.

The staff and I were all excited in January as I am a proud member of the Feline Conservation Federation, and the were having a Wild Cat Weekend in Sarasota Florida. I was thrilled , that accompanying me was our intern, Amanda, to this. We both were going for our CE hours in Wild Cat Husbandry. We strive here to be educated on was and methods to improve the health and lives of our residents.

The day before we were due to leave, January, 8 2014, Spike did not eat. I was concerned, but he has done this before. We press on with the plans and packing. On January 9th, the excitement was electrifying. We were so ecstatic to be on the road and get to meet like minded folks as well as geared to learn some new and exciting things!

Arriving the evening of January 9th, I pulled in and we checked in at the Americinn in Sarasota. After checkin we were told to move the truck to the back. Ok.. so we did. Little did we know the chain of events what that little directive would set off.

After a great buffet, we quickl settled in for the night in anticipation of the following morning. Excited to awake and go to Big Cat Habitat and Gulf Coast Sanctuary, where the classes were being held. After enjoying a leisure breakfast, Amanda and I strolled to through the lobby to the back parking lot. As we walked out, I was a bit confused for a moment. Both of looking back and forth as if we had came out of the wrong exit.

There, at the space where my truck USED to be, stood Amanda and I. Both looking in every direction, hoping against hope that this was some reality TV show and a host would jump out and go “You’ve been punked!” or even a faint whisper in my ear that perhaps my husband had sought out a twisted joke and traveled up here to move the truck on his. But no. It was gone. A 1999, Ford F 350 diesel dually just evaporated from a parking space. Surrounded by newer trucks loaded with construction equipment, the theives had chosen the main vehicle of the jungle. The truck that hauls cats, horses, picks up meat, veggies and just about anything needed for the jungle.Like in the movie gone in 60 seconds… not so much as a speck of glass to even show evidence that a truck was there.

Not to be disuaded, we contacted our head FCF member and they arranged for a cab to come get us. Throughout the entire class, I was receiving calls from family, the insurance company and the police department (who I might add did not show up for a full hour and a half after I called to report the theft and well after I had left the hotel. Stolen vehicles are not a priority) , I still managed to pass the class with a 95%. Thank God for practical knowledge.

During this time, I was getting reports of Spike still not really eating. Worried sick I was anxious to get home. The drive in the rental car was a solemn one.

Arriving home on the afternoon of the 12th, it became apparent, that Spike was not at all his normal self. Through coaxing we did get a small amount into him. Concern grew. I made a resolution that if he was no better or worse, then a vet visit was in order. The next day he had a small amount (the 13th) then nothing at all on the 14th and 15th. We called our vet out to sedate, examine and do labs. The sedation alone was a scary prospect as Spike had exhibited sensitivity to sedation on a prior sedation. Thank God, Dr. Addison listened and only gave him half the dose. He still took over 6 hours to recover.

All labs, fecals and physical were within normal limits. The vet though suspected a possible infection. Bacterial or viral.. no idea. So we started a course of antibiotics. The day after the vet visit we finally catch a break! Sarasota police department had found my truck! Totally intact except the door lock and ignition had been punched out. A keen eyed sheriff in Manatee County ran a license plate check on a truck that was stowed in a marina as this had been a den of stolen boats. Pure luck and the grace of God, brought the truck home (with an polished dashboard, new ball for my bumper hitch, as mine was a smaller ball for pulling the little trailer with the meat bins, and I had parked the truck at the hotel with an almost empty tank, with the forethought to get fuel in the am.. the theives were kind enough to fuel it up for me and give me a full tank!) Evidently, my truck was being used to steal boats!

The antibiotics were started, and usually if you are going to see an improvement on antibiotics, you will see it within the first 48-72 hours. Instead, Spike got worse. I began to see him fade away. I was desperate. I then started a very controverial antibiotic. A high risk antibiotic, but at this point, it was that or watch him die.

As the days went by, he began to show small signs of improvement and began to eat again, small amounts. The one side effect though of this antibiotic was nausea.So he ate well in the morning, but nothing in the afternoon, after his injection. We thought we had it beat though.. he was coming around. Until February 2. He started acting as if his stomach hurt him again, the on February 3rd, he vomited bile. Yellow bile.

That was it. I had been hesitate about re sedating him due to almost losing him the last go round, but we had no choice. Either get him to the vet and allow a full work up, or watch him die. So off we went on that Tuesday,  February 4th.

Dr. Billiar met us at the double doors, and unlike the university allowed us to stay with him to comfort him until he was sedated. With us staying with him, he was a lot less stressed, as well as she listened as well on the sedation and was extremely careful as to how much and how it was given.

He received a full blood work up, fecal analysis, urinalysis, radiographs, barium series, and an ultrasound. Nothing was really jumping out at anyone, so exploratory laparotomy was elected.

Surgery revealed no abnormalties other than an enlarged lymph node that was biopsied and cytology was sent off for interpetation. He recovered well from the surgery but was extremely depressed. Arrangements were made to bring him home on antibiotics. We had to keep him in his transport trailer for two weeks to prevent him from running, jumping, getting the incision dirty or wet. Fun fun.

Finally on the Saturday after his release (February 8th) we were allowed to feed him and he ate with gusto! The progress he has made has been nothing short of amazing. He is now eating twice as much as he ever ate, but we do not begrudge this at all.. we celebrate it.

But there is always a bad side to something great. We never did find out what this was. And as such we have no idea on how to prevent it from happening again. In the veterinary field I have seen this case scenario many times. The animal is sick, testing shows nothing so we open them up, and they miraculously heal. We call it by two phrases “Letting the bad air out” or “Exorcising the demons within”

We also know that without Spike being hand raised, being a photo cub, all this handling and injections would have stressed him. In a lot of cases, this could have been enough to kill him. Because of his hand rearing, we were able to have him sedated only for procedures. Lessening the risk of losing him under sedation, that he was already severely sensitive to. Lessening the stress of daily injections. Lessening the risk of having to take him to the vet. All

that handling helped save his life. 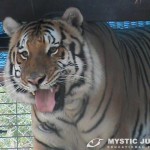 He has been doing wonderful, and in the middle of this the compressor on the walk in cooler went out. But in the broad scheme of the past events, that was nothing. We are just happy and blessed that Spike, the heartbeat of the Jungle, is around to thrill his visitors for many more years!

If you would like to contribute to Spikes medical fund you may do so via paypal at mysticjungleedu@yahoo.com