I have found that as I aged, I seem to be more aware of the world it what is going on in it, than I did as a younger person. I started paying attention to things that effected the world as a whole, instead of what effected just me.  For instance, the same week that Hostess announced it’s closing, we here in the United States, lost one of our own native cats. The Eastern Cougar. Yet, few have heard that fact.

Unfortunately I think this is most likely what is happening to the world population, in this ” me me me ” generation, and one day, maybe soon, we will wake up and what we once took for granted as always being there, could be gone.

We face so many crisis in the world today. World famine, disease, war both foreign and domestic. Who has time to think about such things as even bees. But without such things as bees, we would cease to exist. Bee’s pollinate. Bee’s are God’s creature to assure future generations of crops exist. With no food, there will be world wide hunger.

There are thirty six species of wild cats. The felidae, is the most widespread and diverse species in the world. Everything from your domesticated house cat, up to the majestic lion. But the big cats are the rarity, not the rule.

Without these cats, the world would not be the same in more ways than one. Each individual sub species, acts in a way to impact their natural environment in a positive way. For instance, the Lion culls the herds of wildebeast, impala, etc. They take out the sick, the genetically weaker of these in the herd, in order to assist the herd in keeping a strong, vibrant gene pool. Only the stronger, healthier, and yes, smarter survive to pass their genes on to the next generation. Without the majestic lion these herds would breed themselves out of existence. Disease, starvation from overgrazing on lands that cannot hold the sheer masses. As cruel as it seems the circle of life has it’s place and is needed.

The cats in the world are one of our biggest protectors to our ecological system. Yet, we continually choose to turn a blind eye to what is happening to them. From my own personal assessment, people, when they DO realize what is going on, go one of two ways. They either go to the uninformed, romanticized, removed from reality, view, such as “They all belong in the wild”, or the  active, “I am going to make a difference” route.

Unfortunately the romanticized process of thinking is not only the most popular one, it is also very hard to reason with, as it is fought strong and hard based on emotion not fact. The rain forest was facing loss to deforestation of about 10,000 square miles in 2002, due to plantations, pasture land and logging. In 2012, a mere 6, 418. Which shows that we are starting to pay attention, but is it too late? Or are we running out of land to rape?  When well meaning people state “They belong in the wild” they are so far removed from reality of what “wild” is left, that they often times will chant this even in the face of stone cold facts being presented to them. In a perfect world, YES they belong in the wild. AND YES they still DO. But at what cost?

Man is greedy, as well as vindictive and sometimes downright sadistic. There are those out there that will do anything for their “god”. Money. Even if it means totally annihilating an entire species of animal off of the planet. And what is sad, is the fact that a lot of times these same, greedy individuals know full well their impact on the environment as well as the species, and could care less.

Then you have retribution killings. Killings of these animals, especially the cats such as leopards, because they have killed livestock, a pet, or worse a human. Reality is that people have to live. And to be honest, I am not sure how I would react if a leopard crept into my home and snatched my child from his/her bed to eat. But one  has to merely look into the “whys” of this scenario. Why is this happening and on the rise?

One cannot intrude upon nature and not expect ramifications. Ever encroachment into the Asian/Indian Leopard’s habitat by building of communities, fields for crops, dams for electricity has drastically changed the dynamics of nature. Cause and effect comes into play.

India is the SECOND most populated nation in the world, estimated to be THE LARGEST by 2025 (US Census Bureau). In 2001 there were over 8,000 leopards in India. In 2011 less than 1200. They are being poached (killed for body parts) at the rate of FOUR A WEEK (that is what they know of by capture of poachers with pelts, paws, skulls, teeth etc) or 208 a YEAR.

To give you some insight as to what it takes to get a leopard to maturity, let’s look at the life cycle of the leopard.

It takes a leopard 18-24 months to reach sexual maturity. At that time a leopardess will seek to breed and mate.

She will carry 91-93 days to deliver a litter of 1-3 cubs (they do not generally have large litters unlike lions or tigers) .

Of those 1-3 cubs, only 50% make it to six months old, due to natural predation (snakes, other big cats such as male leopards, tigers and now HUMANS)

So statistically 1.5 cubs make it beyond six months and will remain with the mother until THEY are 18-24 months of age.

During the time the cub(s) are with the mother, she will NOT seek to re-breed (she will not risk bringing a male around her cubs) until THEY are 18-24 months of age and out on their own.

So it take almost 2 years to get ONE leopard to adulthood, and they are killing 416 during that time. So how long do you give the Asian Leopard on this earth? As we speak they may be leaving there last footprints on this earth.

Did you know that AZA (Association of Zoo’s and Aquariums) Zoo’s do NOT breed them, nor are they yet on their SSP (Species Survival Program) . Only private facilities such as Mystic Jungle do.

We know that our cat’s like Keeper, Sher khan and Fury will never be released in their native lands. But the goal is to PRESERVE that precious DNA for future generations so that their descendants can be! We strive daily to enlighten the general public as to the plight of this beautiful animal and why banning private ownership (and yes, in the eyes of the government we are private owners) will be the end of the Asian Leopard.

Until mankind understands and accepts responsibility by stepping up to the plate we will continue to lose entire species to extinction. And remember.. extinction is FOREVER!
“What man does not understand, he fears. What he fears he destroys” 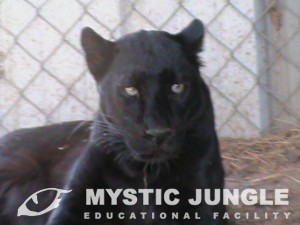