The Power of Knowledge

We live in an era where information is at our fingertips. It is up to US, the intelligent persons that we are to research everything we see or hear. Today I will touch base on not only sanctuaries and private zoos  in the US but on conservation. Both can co -exist in perfect harmony and compliment each other, irregardless of prior belief.

There are many roads on the path to conservation. Some are out there in the trenches, in the homelands of the vanishing species, pulling the survivors from the brink of extinction, into captive breeding programs, balancing the act of genetic diversity with a limited amount of breeding individuals, and preparing the survivors to some how at a later date, to be released to the wild. This is the picture that most have in their minds of true conservation.

But that is merely one road. What good does it do to save a species, that you are about to release into their homeland, if you do not educate the human population enough to protect them? How do you stop the greedy from poaching them for their body parts, or the mere sport of killing them? Ban laws obviously only works to keep the people that want to obey the law in check.. it does nothing for those that have one thing and one thing only in mind. MONEY. And that thought process is not only in poaching, but be aware that it also occurs in a sanctuary type environment.

The animals in your AZA, ZAA, USZA, FCF and private facility’s are all areas to look for your ambassadors for threatened species. Even though many of the individuals may never contribute their DNA to the wild gene pool, they do so much for conservation! They make the general public aware of that species, their status in the wild and what if anything can be done for their recovery. It is human nature to have to be able to see, smell and yes TOUCH in order to recognize that something is REAL. It stimulates the brain and peaks the concern and interest.

There are 37 species of wild cats in the world, yet few know of only the big five, Cheetah, Leopard, Lion, Tiger, Cougar. These get a lot of attention, and most know of them or of their plights. Yet, all it takes is a click of a link to see how many species and what their status is ( http://dialspace.dial.pipex.com/agarman/bco/species.htm) and even this is not updated as a new species of cat has just been discovered. The Tigrina ( http://www.wired.co.uk/news/archive/2013-12/01/tigrina ) was just recently discovered last year.

Without private facilites breeding these in captivity, a lot of DNA would be lost. Major zoo’s do not have the space nor the money that the population of the world’s individual’s do. A private facility concentrates on the animals while a zoo must concentrate on a lot more…. they must also concentrate on the landscaping, the concessions, etc. And through their own admission, cannot save them all!! ( http://www.nytimes.com/2012/05/28/science/zoos-bitter-choice-to-save-some-species-letting-others-die.html?_r=0 ) AZA zoo’s do a LOT for conservation but they are not the ONLY answer.

You will hear many battle cries that cats especially in private zoo’s do nothing for conservation. Again, let me reiterate the fact that although they may not at this time contribute their DNA to the wild population, they help raise awareness. They endear the public to that particular animal. And as I tell our guests here, a tiger is a tiger is a tiger. All are Panthera tigris, then they splinter into sub species, that nature has morphed the DNA to adapt them to the environment that they are surviving in (for example, a Siberian Tiger is not designed to survive the climate of say India, nor is the prey of enough size to not require the cat to have to use more calories than it gains on a hunt) Nature can and does take care of her own. So even a “mutt” tiger could theoretically be released into the wild and through the process of natural selection ( only the ones that are fit to survive that particular climate will survive long enough to procreate) over generations, the DNA will change within to make sure that only the ones that are fit to survive will be propagated.

So please keep this in mind. Crossing of sub species a lot of times CAN BE A GOOD THING. It creates a genetic diversity for a species that is about to suffer a genetic bottleneck and/or be totally annilihated.

My message to all my readers… before you jump on that “ban wagon” such as the breeding of tigers or lions and yes leopards in the US by private facilities, think about the long term effect. The very species that you so adamently want to protect, you could very well be aiding in their demise by the simple stroke of a pen. 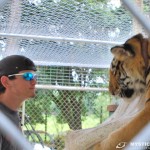