The Day The Animals Cried

I have written on this before, but this atrocity is one that merits attention once again. The Ohio Exotic Ban law is about to go into full effect as of January 1 2014. For the un-informed, one thinks this is a simple case of the closure of “road side zoo’s” and irresponsible owners having to shut down and give their animals up. This is the furthest from the truth as you can get.

On October 18th 2011, Terry Thompson of Zanesville Ohio, was found dead from an apparent gunshot wound to the head. He alledgely CUT all of this exotic animals cages, (mind you he had keys) before shooting himself in the head. Now also remember that all of these vicious, ferocious animals were roaming around and he lived long enough to not only cut all the cages, but to end his own life. All wounds from animals were found to be post mortem.  Some reports are that he opened the cage doors and then cut the cages, but this is inconsistent with all the news reports that stated otherwise.  No matter who, what, where, when or why, forty nine animals lost their lives. And THAT is only the beginning.

NONE of the animals left the property. The lion that was seen from a neighboring horse farm was merely at the boundary of the two farms. The mountain lion was shot and THEN staggered into a neighboring farm as it lay dying. In all forty nine animals were murdered. One was a tigress and her cubs that WAS STILL IN HER ENCLOSURE. This was executed on the orders from Sheriff Lutz. The only surviving animals were three leopards (by far the most dangerous and were NOT released by Terry Thompson as well as the MOST VALUABLE among the exotics) two rare macaque’s and one bear.    Of these five animals only four were returned to his wife, Marian , because the younger male leopard (the son of the two older ones) was killed by the Columbus Zoo when a guillotine door was dropped on it’s back.

Ohio had very lax laws on the ownership of exotic animals. So instead of placing reasonable commonsense regulation, Governor Kaish with the aide of the Humane Society of the United States, Jack Hannah, and Big Cat Rescue shoved into law a death sentence for these animals.

The law was pushed through. The state of  Ohio exotic animal owners presented their side to the senate, which fell on deaf ears. In fact, some senators were so rude as to even get up and leave and some chose to not even be bothered to show up. The time clock for execution was already set. They sold this bill of goods as a “public safety issue” . Which is the furthest from the truth. Let me repeat this one more time. This pertains to big cats.  THERE HAS NEVER, I REPEAT NEVER, been a case of a big cat escaping, going on a rampage through a neighborhood , and killing people. NOT GOING TO HAPPEN. Remember the nature of the beast. Big cats are territorial. Their enclosure is “their den”. There is safety in that den. Even if they leave the den, they will return to the area that they feel safe. They may roam. In fact even if they do leave the property, (such as in the case of Steve Sipek and his cat Bobo, the cat was on his way HOME when he was shot and killed) they WILL come home.

What about the tigress at the San Fransico zoo that scaled her wall and attacked two young men, killing one of them, you may ask? Well, my heart goes out to the family of the victims first and foremost. But the tigress never tried to leave the zoo. Later reports state that she had in fact been taunted all day by these two young men, scaled the wall and ran them down. In the process she passed her natural prey, and several visitors. This was a revenge kill. The fact remains that big cats will not stray far from home, nor will they go on a wanton killing spree. This law was not a “public safety issue” If you do not want attacked by a big cat, then it is real simple. Do not place yourself into direct contact with the cat.

The ban law states that current owners “may keep their animals but acquire no new ones”. What they fell to tell you is the fact of all the hoops that these owners must now go through to keep them.

2. Owners must purchase a liablitly insurance of $1,000,000.00 or $250,000.00 surety bond. Well, that may be all well and good, but understand that there are only a handful of insurance companies that offer this type of coverage, and you have to jump through some MAJOR hoops to get this. Trust me on this as we have to have this same type of coverage. For your average private owner, this will be out of the realm.  It costs us almost $4,000.00 a YEAR in insurance alone. And we are not open to the public, so I can only imagine what the zoo’s there must be going through.

3. Microchipping. Well, as your dog and cat owner is probably fully aware of, this is a pretty simple procedure. After all, you just pop Fido or Kitty into the crate, off to the vet you go, and a simple injection and you are done. NOW think about what this entails with ANY exotic. The needle is about a 12 gauge. (the smaller the guage number is the bigger the barrel of the needle) . Most exotic animal hide is tough (especially on intact male animals. This is a survival trait as males fight over territory and mates) and sedation is necessary, so that no one is injured.  Just the trauma of trying to sedate the animal can be risking the animals life. The stress of the capture (if this is an animal that is an exhibit animal) can kill them right off the bat. With stress the heart rate and the adrenaline shoots up. This can lead to using more sedative. The animal will be wound up, then when the sedative finally does take effect, you most often lose them. The state of Ohio is giving no exceptions regardless of level of handling or age. (in other words an older 18 year old tiger has to have it done the same as a young cub)

4. Must have all male animals sterilized. Unless deemed unfit for surgery by a vet. Seems simple enough right? Well neutering in big cats has been undergoing a study where it is indicitive of aiding in the progression of arthritis (due to the laxicity of the back muscles with the lack of testosterone) as well as weight gain.

5. Must be a member of the AZA or ZAA. Both organizations are private clubs. They do have wonderful guidelines. but they have no governing powers to punish nor seize animals.Not to mention that the accreditation process can take up to TWO years as well as THOUSANDS of dollars to the owner! And to force owners to not only pay all these fees as above stated then have to PAY yet another private entity is at the very least unconstitutional. Then you have the exemption of being a sanctuary that is GFAS (Global Federation of Animal Sanctuaries which is bed mates with Big Cat Rescue and the Humane Society of the United States) and where one of the recent big cat fatalities on a keeper occured. Just because you have a tax status does not make you a big cat expert, nor does it change the residents within the facility

8. Must have no less than one acre of land (again, here I cannot argue with)

9. Must have a program of veterinary care ( I agree)

10. Must have emergency plans (again I agree)

In writing this law the legislators KNEW the owners could not comply beyond the first three or four!  So they built a prison to the tune of 2.9 MILLION dollars at the tax payers expense. Animals that had once known the caress of the hand of their owners, seen the light of day, knew what it was like to bath in love and fresh air, will now be SEIZED as of January 1st, 2014 and placed in this death camp. There they will never again see the light of day “for safety reasons”. All concrete and steel. And PETA thinks the law is not strict enough. SAY WHAT? So instead of having regulations that private owners and private zoo’s could comply with they went overboard to extinguish ALL exotic animal ownership. http://www.dispatch.com/content/stories/local/2013/06/30/nobody-home.html

Look at the faces. Learn them. The faces of people that did not listen, nor did they seem to care. http://www.dispatch.com/content/stories/local/2012/06/06/kasich-signs-ohios-first-exotic-animal-regulations.html

We are on our way to the extinction of many rare and endangered species. Remember AZA zoo’s only have so many cage spaces alloted to breeding certain approved species COLLECTIVELY (which means that only 10 breeding pairs of say Snow leopards are allowed throughout the US, then another zoo has a pair that they want to breed, THEY CANNOT) and by their OWN admission have had to make life and death choices on which species to save. http://www.care2.com/causes/zoos-make-hard-choices-to-protect-endangered-species.html

With this in mind, remember we have the Humane Society of the United States, Born Free, IFAW and Big Cat Rescue trying to put the pressure on your representatives to BAN all big cats. It is called the “Big Cat Public Safety Act” and the title itself is misleading. Remember, the ONLY persons that have been involved in big cat incidents were those that willingly placed themself into direct contact with the cat. This is about control. Remember when you BAN ANYTHING you create the black market element that can actually harm those species IN THE WILD! Say NO to big cat ban laws if you want these animals to be around for your children to see!

Purrs, chuffles and saws from the Jungle! 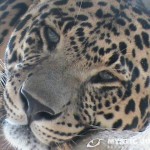