As many know I have had a life time in veterinary medicine, as well as the animal industry as a whole. I have worked some small farm town community clinics up to the Mayo type hospital of veterinary medicine. With all this vast experience of seeing a lot of unusual cases, I tend to think “outside the box”. In fact at my last position as Head Technician, to quote my doctor “When people hear hoof beats, they look for horses, Vera on the other hand looks for Zebra’s”

Well, sometimes that is not a bad thing. Sometimes things can be very obvious and clear cut, while others are more evasive on finding that golden answer.

Spike is one such case. What is even harder is Spike is a resident here at the jungle as well as one I raised from a young cub of four months old. A veterinary technician can remain calm, cool and collected when the patient is anyone else’s but their own.

Shortly after I left to go to a big cat husbandry course out of town, Spike became critically ill in January of 2014. He underwent a CBC, Chemistry panel, urinalyis, blood tests for specific infections (Salmonella being one of them) fecal analysis, fecal cultures, Felu/FIV testing, ultrasound, radiographs, barium series, and finally an abdominal exploratory surgery with cytology’s and biopsy’s. All of these tests and/or procedures were either within normal limits or negative.  Despite no real answers he came home and quickly gained weight and strength. Our fear though was that because we did not know what had caused this, then how could we possibly prevent it from happeing again?

Barely six months later, I leave to go to another Feline Conservation Federation convention for continuing education, and he became ill. He was rushed to Ocala for emergency supportive care as well as more diagnostics. He had more blood work, fecal cultures (testing for H-pylori) fecal analysis, skull radiographs, dental radiographs, and an endoscopy. Again, all tests and procedures revealed either negative or within normal limits. Still no answers. While there though, at the clinic, he did begin to eat again.

This was also short lived, because after arriving home, he crashed three more times. I had to give him an anti emetic each time (the cost of this medication was $167.00 a bottle my cost, and even more for the one while he was at the clinic in Ocala) . We were beginning to lose all hope that Spike would make it.

We reached out to our fellow big cat owners. For the most part, they were supportive. Then we had a few that stated they had indeed saw cases such as this, and the people had spent a ton of money, only to end up with a dead cat. At this point we are at over twelve thousand with Spike. But who can put money value on an animal that is a part of your heart?

Then, as often times it does, it came to me in my sleep. I awoke with a start and shouted “ULCERS!” This was the only thing that made sense! So I began my research. The only thing missing from his symptoms in this was the “acid reflux”. And then as if on demand, the very next day he had an incident of it.

We began a routine of lean meat, famotidine, and carafate. This was working “ok”. Then I got an email from a colleague informing me that her tiger had ulcers and recommended omeprazole. What a world of difference. So we began to wean him off the others, until finally we were just down to the omeprazole.

As of Monday, September 21, he has been off of all medication. So far, there has been no signs of nausea or vomiting. We continue to cut all fat from his meat, to make sure that his suspected ulcer(s) have time to heal. Hopefully in time he will go back to a more normal diet.

One question I have been asked though is the fact that “Do tigers in the wild get ulcers?” You bet your sweet bippy they do! And in fact WE HUMANS gave them to them! Ulcers are caused 98% of the time by a bacteria called H-pylori. Tigers used to prey on man (and some still do) and by eating us, they acquired the bacteria. This bacteria can also be transferred by contaminated water sources, food sources, saliva etc. So a mother can give it to her cubs and pass it on from generation to generation.

What is now believed, is that this has been Spike’s  issue for some time. With my leaving town he stressed. Stress raises the cortisol levels, therefore lowering the body’s immune system, making him susceptable to the bacteria.

This has been a long tough road, but not one that we will give up, unless of course Spike says it is time to give up! 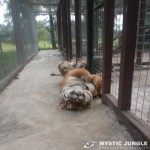