In India, as of 2019 a tiger a week was killed (poaching for body parts, hit by car, revenge killings, snare traps, electrecuted etc) whereas three (3) Leopards a DAY are killed for the exact same reason!

And with these figures, they are not inclusive of inhabitant/leopard conflict. And for the poaching numbers this is only accounting for the ones that are caught.

A decade ago, India, the second most populated nation in the world have over 8,000 leopards with those numbers dropping drastically.

It takes a leopard 18-24 months to reach sexual maturity. The leopardess will seek out a mate and conceive with the resultant litter, if the mating was successful, being from 1-3 cubs. Of those 1-3 cubs, only 50% make it with natural predation being a big factor (other big cats, snakes etc killing off the cubs).

So 1.5 cubs make it and stays with the Leopardess until they are sexually mature.The Leopardess will not seek to rebreed during this time. This can be attributed to the mothers instincts to not bring another male close to her cubs and hormones from the lactation (even as the cubs age, they will tend to nurse for comfort) The males tend to stay longer as they do not challenge the mother as readily as the females do for alpha position.

Thousands of years ago, the leopard faced extinction due to a mass kill off. The reasons are still not known today but the leopard did recover even though they suffered a genetic bottle neck, much the same as the Cheetah.

There are arguments out there that captive breeding programs here in the US do not have enough diverse gene pool to contribute to the saving of the Leopard. Yes, the gene pool is small, but so is the Cheetah, the tiger and most all big cats due to man’s interference. So what are we supposed to do? Mystic Jungle for one will not stand idly by and do nothing. We are committed to the conservation and preservation of the Indian Leopard 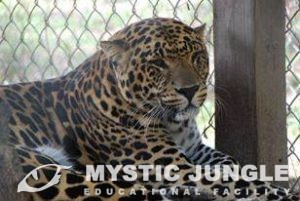